This is the image I wanted to show you in class on Wednesday, an 1896 painting by John William Waterhouse titled Hylas and the Nymphs. Properly speaking the feminine figures are naiads– spirits of fresh water– rather than Nereids, who belong to the sea.

While I was looking for this image I came across another, also painted by Waterhouse, titled A Naiad:

Recently the first of these paintings was the subject of some small controversy when the Manchester Art Gallery removed it from display. See https://www.theguardian.com/artanddesign/2018/jan/31/manchester-art-gallery-removes-waterhouse-naked-nymphs-painting-prompt-conversation

Here’s an entry on Ariadne from the Encyclopedia of Greek and Roman Mythology, which is available online through the library website: Ariadne

Below: a painting by Swiss artist Angelica Kauffman created in 1794 titled Ariadne Abandoned by Theseus. This image, and hundreds of others representing Ariadne, was found at artstor.org.

“The days run away like wild horses over the hills,” wrote Chas. Bukowsi– and he was right. The end of the semester functions as a caesura, a gap between phonemes, the white space separating words. Which is one way of saying that our lives– my life– are syntagmatic: a sentence begun not long ago headed inexorably toward some final punctuation, whether a modest, dignified period or mysterious ellipses. It’s cheap philosophy to say so, but crossing from one event into the next sometimes forces us to a minor crisis of indecision:

I am learning to appreciate silence uncluttered by the vain compulsion to always speak. As much as I love the cursive of voices, most especially my own, a moment is revealed when the only sounds audible are the words that have not been said. What did we not say to each other? What did we forget?

In California Culture we didn’t come to terms with the fact that the subject of our study is legend: a vision the world once had in a dream– ultima thule, the western isles, a terrestrial paradise promising repletion and knowledge, a myth that led Ulysses (according to Lord Alfred Tennyson)

To sail beyond the sunset, and the baths
Of all the western stars, until I die.

We can hear the echo of an ancient impulse in the rhetoric of American expansionism from Bishop Berkeley’s “Westward the course of Empire takes its way” to Horace Greeley’s admonition “Go West young man.”  Berkeley’s famous line comes from his poem America, or the Muse’s Refuge: A Prophecy written before either California or the United States existed. Emanuel Leutze, a German immigrant, borrowed the phrase to title a painting completed during the first year of the Civil War. The West, California included, thus served as what we might think of as a ‘third space’ or an ‘other scene’– a place where sectional antagonisms would be worked through, as in Owen Wister’s novel The Virginian. 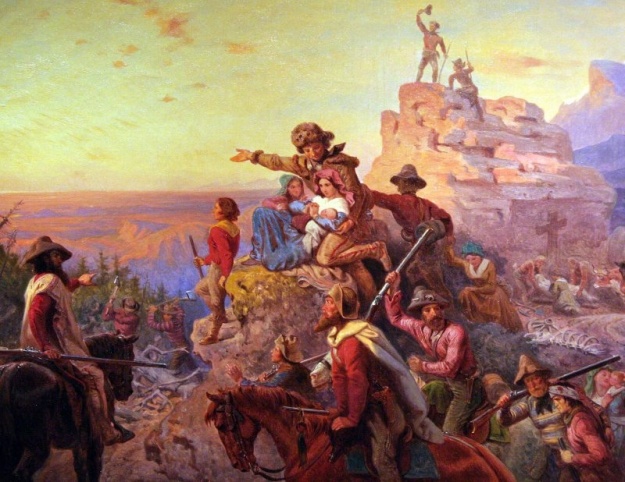