Emile De Antonio’s provocative 1968 documentary In the Year of the Pig. There are distressing images in this film. But also long talky patches. Non-required. 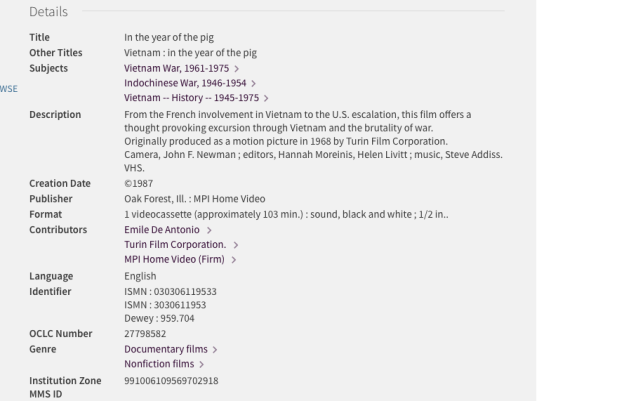 Marc Riboud died two years ago at the age of 93. He was a member of the French Resistance, a world traveller, and a highly regarded photojournalist. Here are some images he made during the late 1960s in North Vietnam and the United States.

Vietnam: A Television History was first broadcast over 30 years ago during the Reagan Era and the response to it across the rather narrow political spectrum of the US was generally positive. The exception, however, was the series’ fifth episode, which narrated the war from the perspective of those who won it. See Gen. Vo Nguyen Giap, the architect of the defeat of the French at Dien Bien Phu, discuss strategy and philosophy. Hear an officer in the NVA explain that “in order to fight the Americans you must cling to their belts.” I recommend this 50-odd minute program over more recent documentaries because it eschews the elegaic mode that has come to characterize US Americans’ re-telling of events. If you’re interested in delving even further you might consult two additional documentaries from the period, Winter Soldier and Hearts and Minds.

Something to ponder in light of Vandover and the Brute. Gustav Hasford’s The Short-Timers formed the basis of this film, and it’s actually a much darker comedy than Kubrick’s adaptation, Full Metal Jacket. In any case the dualism Sgt. Joker invokes lies at the heart of Frank Norris’s novel.