Thinking about a unit on African American Gothic. There’s a ton of stuff out there on the wider genre of Gothic and many people have noted that literary genres such as the slave narrative are effectively Gothic texts. I tried doing something along these lines a few years ago. We used Harriet Jacobs’s Incidents in the Life of a Slave Girl to talk about themes of captivity and haunting. Certainly you could read a film like Night of the Living Dead not only as a story about mass consumption but as a dramatization of the pro-segregation campaigns collectively known as ‘Massive Resistance’. Duane Jones, who plays the hero Ben, fends of soulless hordes driven by their zombie white-supremacist ideology. He would go on to act in Ganja & Hess, which takes up the vampire legend for its own purposes.

Here’s a photograph (left) made by Gordon Parks– better known perhaps as the director of the seminal blaxploitation film Shaft-– titled American Gothic, Washington, D.C. The visual rhyme with Grant Wood’s famous painting American Gothic (right) forms the basis of Parks’s resignifying gesture, one which is then complicated by the substitution of a US flag for the frame house in the original. If Wood called his painting American Gothic ironically, by virtue of the presence of a single arched (gothic style) window, does Parks’s choice of a flag indicate that the nation itself is (ridiculously, improbably) gothicky? 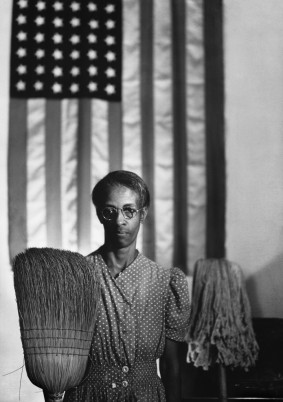 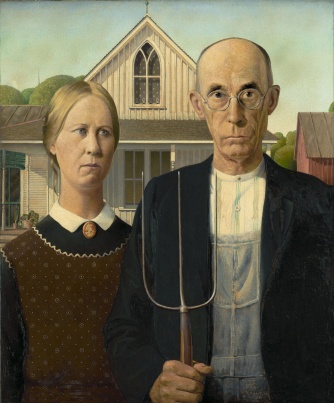