From the NYT:
The richest 400 people in the US pay a lower tax rate than everyone else. 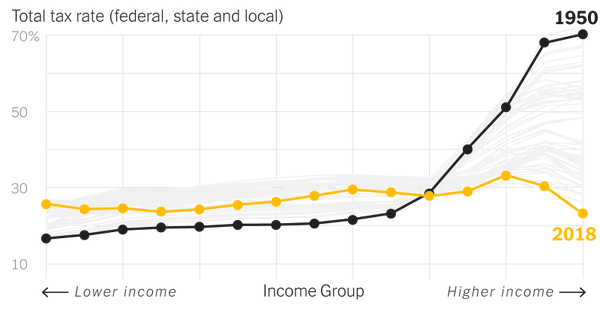 David Fulton, writing as Jack Thorne, also wrote a novel about the Wilmington Coup, titled Hanover (5mb pdf). He worked as a journalist for the Daily Record, Wilmington’s Black newspaper, where Alexander Manly’s “inflammatory” editorial first appeared. The issue concerned what Angela Davis has called the myth of the Black rapist (see this pdf: MythBRCh11).

“Women of that race (white),” Manly wrote, “are not any more particular in the matter of clandestine meetings with colored men than are the white men with colored women. Meetings of this kind go on for some time until the woman’s infatuation, or the man’s boldness, bring attention to them, and the man is lynched for rape. Every Negro lynched is called a ‘big burly, black brute,’ when in fact many of those who have thus been dealt with had white men for their fathers, and were not only not ‘black’ and ‘burly’ but were sufficiently attractive for white girls of culture and refinement to fall in love with them as is very well known to all.”

Below is an excerpt from Hanover which captures some of the flavor of white supremacist ideology: