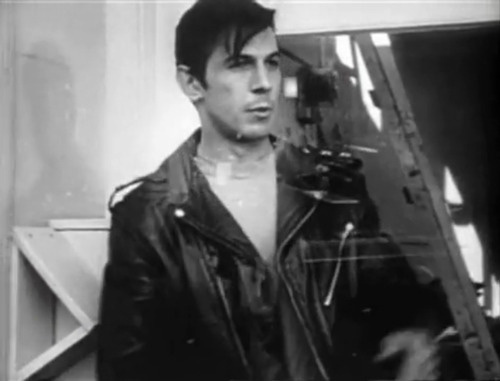 Mr. Vallandigham: (who had just entered): Mr. Brown, who sent you here?

Brown: No man sent me here; it was my own prompting and that of my Maker, or that of the Devil, — whichever you please to ascribe it to. I acknowledge no master in human form.

We’ve got to seek some new methods, a reappraisal of the situation, some new methods for attacking it or solving it, and a new direction, and new allies. We need allies who are going to help us achieve a victory, not allies who are going to tell us to be nonviolent. If a white man wants to be your ally, what does he think of John Brown? You know what John Brown did? He went to war. He was a white man who went to war against white people to help free slaves. He wasn’t nonviolent. White people call John Brown a nut. Go read the history, go read what all of them say about John Brown. They’re trying to make it look like he was a nut, a fanatic. They made a movie on it, I saw a movie on the screen one night. Why, I would be afraid to get near John Brown if I go by what other white folks say about him.

But they depict him in this image because he was willing to shed blood to free the slaves. And any white man who is ready and willing to shed blood for your freedom—in the sight of other whites, he’s nuts. As long as he wants to come up with some nonviolent action, they go for that, if he’s liberal, a nonviolent liberal, a love-everybody liberal. But when it comes time for making the same kind of contribution for your and my freedom that was necessary for them to make for their own freedom, they back out of the situation. So, when you want to know good white folks in history where black people are concerned, go read the history of John Brown.

A concise mini-documentary on John Brown:

Note that the film-maker invokes English philosopher John Locke’s contention from the Second Treatise on Civil Government that slavery is, effectively, a state of war:

END_OF_DOCUMENT_TOKEN_TO_BE_REPLACED

Hey wasn’t it cool the way we commemorated the largest, most wide-spread anti-war protests in the history of humanity last week? I mean specifically the unprecedented number (up to 30 million) of people who demonstrated against the imminent invasion of Iraq on the weekend of Feb. 15 and 16, 2003?

I’ve amended the schedule to reflect the change. Thursday there are no assignments due– we’ll review. I strongly recommend, however, that you look over this very short (roughly 4 page) entry on Naturalism from the Encyclopedia of a Novel (a text that is available in its entirety as a pdf on the Free Books page of this blog):

You might also, if you’re interested, peruse Zola’s seminal essay, “The Experimental Novel.” Should you wind up choosing to write a final paper on Therese Raquin this will come in handy:

Let me give you a word of the philosophy of reform. The whole history of the progress of human liberty shows that all concessions yet made to her august claims, have been born of earnest struggle. The conflict has been exciting, agitating, all-absorbing, and for the time being, putting all other tumults to silence. It must do this or it does nothing. If there is no struggle there is no progress. Those who profess to favor freedom and yet deprecate agitation, are men who want crops without plowing up the ground, they want rain without thunder and lightning. They want the ocean without the awful roar of its many waters.

See if you can’t relate the following images to our reading.

END_OF_DOCUMENT_TOKEN_TO_BE_REPLACED

Looks like Metro Manila is available on youtube. You can also screen it streaming via netflix. This is one of the films that you can use for your sequence analysis assignment.