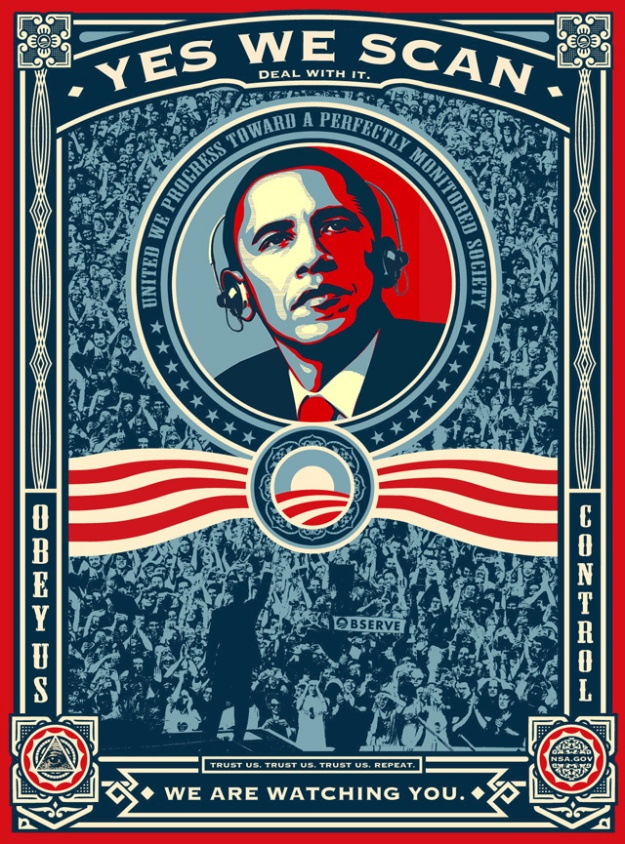 “I originally supported Obama vigorously because his proclaimed policy positions aligned with my beliefs. I have never been an unconditional Obama supporter or cheerleader, so I’m pleased to see people subvert my Obama images as a way to critique him and demonstrate the wide gap between some of his promises and actions. Subversion of well known symbols and images for social commentary has long been a technique in my repertoire, so I’m glad to see it in the work of others. I have even subverted my own Obama image in support of Occupy. There are no sacred cows, and I agree that Obama needs to be called out on an NSA program that over-reaches to the extreme and shouldn’t be secret. We live in a remix culture and remix is a valuable form of communication when the re-configuration makes a strong statement.”

Note that his more general remarks on the press and its socio-political functions epitomize Enlightenment values.

Here is a timeline tracking the development of the exposure of NSA mass surveillance. Currently Edward Snowden has been charged with espionage under a law originally passed in 1917 in order to silence dissent against WWI and destroy political organizations such as the IWW. Given that Snowden was not acting at the behest of another government such chargers are, on their face, ludicrous. But this is what national security states do: they limit as far as possible active and ethically motivated truth-telling about government malfeasance. The issues here are manifold and crucially important. They concern corporate-government collusion, the viability of a free press, privacy rights, and the militarization of the US. Such issues do not fall along a liberal/conservative dividing line. If anything, putative liberals such as Dianne Feinstein and Nancy Pelosi have demonstrated their fealty to invasive government powers under the rubric of an overhyped “war on terror”. Notably, more Americans were killed by toddlers this  year than by terrorism.

20 May Edward Snowden, an employee of defence contractor Booz Allen Hamilton at the National Security Agency, arrives in Hong Kong from Hawaii. He carries four laptop computers that enable him to gain access to some of the US government’s most highly-classified secrets.

1 June Guardian journalists Glenn Greenwald and Ewen MacAskill and documentary maker Laura Poitras fly from New York to Hong Kong. They meet Snowden in a Kowloon hotel after he identifies himself with a Rubik’s cube and begin a week of interviews with their source.

5 June The Guardian publishes its first exclusive based on Snowden’s leak, revealing a secret court order showing that the US government had forced the telecoms giant Verizon to hand over the phone records of millions of Americans.

6 June A second story reveals the existence of the previously undisclosed programme Prism, which internal NSA documents claim gives the agency “direct access” to data held by Google, Facebook, Apple and other US internet giants. The tech companies deny that they have set up “back door access” to their systems for the US government.

7 June Barack Obama defends the two programmes, saying they are overseen by the courts and Congress. Insisting that “the right balance” had been struck between security and privacy, he says: “You can’t have 100% security, and also then have 100% privacy and zero inconvenience.”

The Guardian reports that GCHQ has been able to see user communications data from the American internet companies, because it had access to Prism.

8 June Another of Snowden’s leaks reveals the existence of an internal NSA tool – Boundless Informant – that allows it to record and analyse where its data comes from, and raises questions about its repeated assurances to Congress that it cannot keep track of all the surveillance it performs on American communications.

9 June Snowden decides to go public. In a video interview he says: “I have no intention of hiding who I am because I know I have done nothing wrong.”

10 June Snowden checks out of his Hong Kong hotel.

12 June Hong Kong’s South China Morning Post publishes the first interview with Snowden since he revealed his identity. He says he intends to stay in the city until asked to leave and discloses that the NSA has been hacking into Hong Kong and Chinese computers since 2009.

14 June The Home Office instructs airlines not to allow Snowden to board any flights to the UK.

20 June Top secret documents published by the Guardian show how US judges have signed off on broad orders allowing the NSA to make use of information “inadvertently” collected from domestic US communications without a warrant.

21 June A Guardian exclusive reveals that GCHQ has gained access to the network of cables which carry the world’s phone calls and internet traffic and is processing vast streams of sensitive personal information it shares with the NSA.

The US files espionage charges against Snowden and requests that Hong Kong detain him for extradition.

23 June Snowden leaves Hong Kong on a flight to Moscow. In a statement, the Hong Kong government says documents submitted by the US did not “fully comply with the legal requirements under Hong Kong law” and it had no legal basis to prevent him leaving. 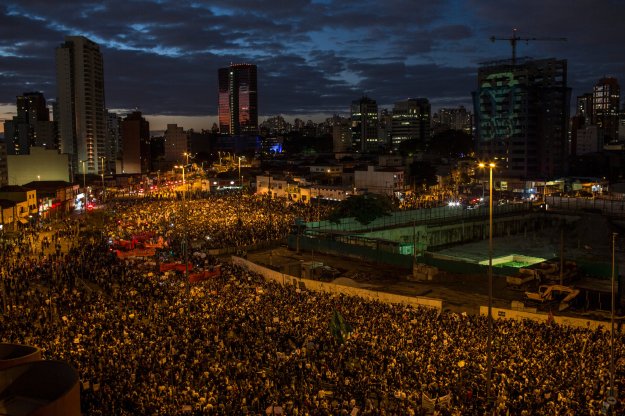 I can’t find a proper cite for this quote though it has been circulating the web for some time. 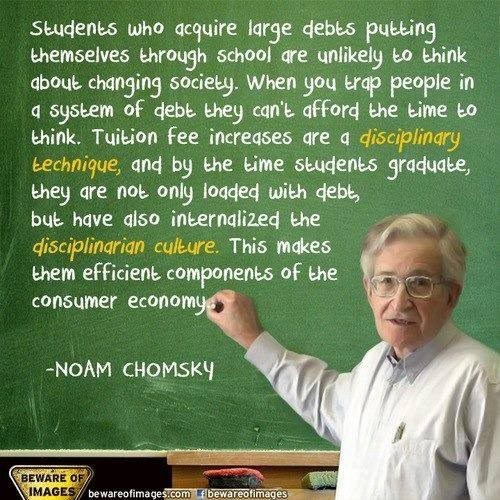 Opening the Closed Mind: The Effect of Exposure to Literature on the Need for Closure.

It is hoped that this experiment will stimulate further investigation into the potential of literature in opening closed minds, as well as give one a pause to think about the effects of current cut-backs of education in the arts and humanities. In ancient Greece, all students, no matter their future profession, had to know Homer by heart. The method may seem outdated, yet one may still wonder how such an immersion in literature may have contributed to the education of philosophers, mathematicians, and writers who, although separated from present time by two-and-a-half millennia, developed minds whose supple and agile turns are still admired.

As you’d expect from an alumnus of Dogme 95, Thomas Vinterberg’s Submarino employs light deftly as a means of emphasizing dramatic content. There are several remarkable scenes– an improvised baptism, for example, and shots of a man in the grip of addiction– where set lighting is key to the audience’s response. Notably, however, Vinterberg has chosen not to adhere to Dogme 95’s purist admonition to use only natural light sources as he did in 1998’s Celebration. As a result, this aspect of the mise en scene is textured by contrasts: the saturated flash of television sets in an electronics store window counterpoints a pale grey afternoon sky or the sickly fluorescence of a pub men’s room.

Submarino‘s story is fairly unsparing: two brothers raised by an alcoholic mother briefly encounter each other as adults after years apart. The eldest, Nick, has just been released from prison, while his younger brother (who is referred to only as “Nick’s brother” or “Martin’s father”) struggles to manage a heroin addiction as he raises a son. A quiet foreboding accumulates as the plot advances (and regresses), one that made me think of Requiem for a Dream. Indeed, if there is an obvious criticism to be made of the film at the level of content, it is that Submarino‘s characters suffer far too much. The parallel with Aronofsky’s Requiem— especially one of the physical forms this suffering takes– seems more of a repetition than a correspondence. This echo could be down to the source material, a novel by Jacob Bengtsson that has yet to be translated into English. Not to be cryptic, but once you’ve seen both films you’ll see what I mean.

Still, Vinterberg offers the surviving characters a shot at redemption. And if he does so quietly, almost tacitly, the final sequences of Submarino lighten a burden the audience has been compelled to share.

“With all the other high-anxiety news out there — from NSA snooping to Syria to the trial of Trayvon Martin’s killer — there’s a quiet crisis that could get lost in the shuffle: If Congress doesn’t act, on July 1, students attending school on subsidized Stafford student loans — loans awarded on the basis of economic need — will see their interest rates double from 3.4 percent to 6.8 percent.

“Brandon Anderson is one of those students, and he’s started a petition urging Congress to keep the loan rate from doubling. Brandon, a veteran who is working with the I Am Not a Loan campaign, is worried about graduating with around $25,000 in debt, and with good reason. For someone just starting out on a career in an uncertain economy, debt like that — and for many students, it’s even more — can be a major obstacle to getting established in life, starting a family, and all the things we used to take for granted for young adults.

“Not surprisingly, this burden falls heaviest on young people of color, who remain on the losing end of America’s yawning racial wealth gap.”

Here’s a reading list and a filmography for those lassitudinous days of summer.

Books I read Spring semester when I should have been doing other things:

I’d set this crime novel against anything written by James Ellroy or Massimo Carlotto in terms of its terse syntax and hardcore violence. The basis (with the other books from the Red Riding Quartet) for a series of recent film adaptations. Peace’s four novels have been celebrated as “an occult history of Thatcherism” (i.e. neoliberalism).

END_OF_DOCUMENT_TOKEN_TO_BE_REPLACED

“The individual responsible for one of the most significant leaks in US political history is Edward Snowden, a 29-year-old former technical assistant for the CIA and current employee of the defence contractor Booz Allen Hamilton. Snowden has been working at the National Security Agency for the last four years as an employee of various outside contractors, including Booz Allen and Dell.

“The Guardian, after several days of interviews, is revealing his identity at his request. From the moment he decided to disclose numerous top-secret documents to the public, he was determined not to opt for the protection of anonymity. “I have no intention of hiding who I am because I know I have done nothing wrong,” he said.

“Snowden will go down in history as one of America’s most consequential whistleblowers, alongside Daniel Ellsberg and Bradley Manning. He is responsible for handing over material from one of the world’s most secretive organisations – the NSA.”