I’ve been grading midterms (no I’m not done yet so don’t ask) and one of the things that’s struck me is the plurality of readings of the quote from AGP. For those who correctly identified this passage the issue of race loomed large, but other themes/ affects/ associations were raised as well. As a few people noted, the whiteness of the shrouded figure does suggest a visual rhyme with Ayesha’s veiled body. And if we were to push that link further with the help of some Victorian Era social context, we might even arrive at the conclusion that white itself is an “empty signifier.” Whiteness may have a “positive” valence in a white supremacist world, but it also possesses a negative charge. As far back as Antiquity whiteness signified leprosy, and in the 19th century, whiteness was often correlated with syphilis. In addition there was a visual convention of warning young men against the dangers of venereal disease by presenting a beautiful female figure whose appearance was a kind of mask. See below (and before you go off on a google image search with the keyword “syphilis” be warned that what you’ll find will probably stay with you for a very long time): 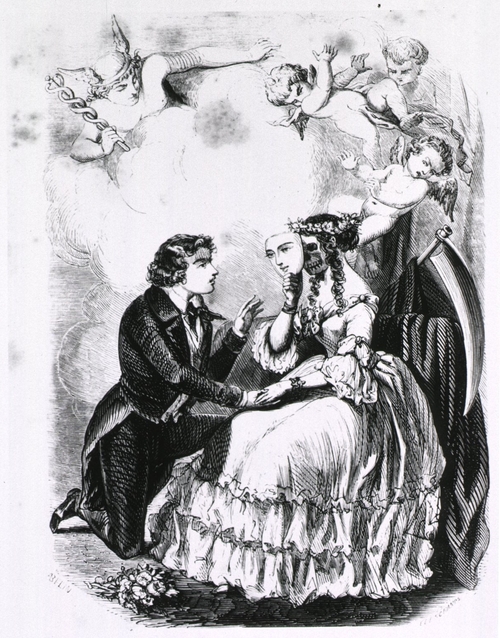 Finally, consider the following lines from Coleridge’s “Rime of the Ancient Mariner“:

Her lips were red, her looks were free,
Her locks were yellow as gold:
Her skin was as white as leprosy,
The Nightmare Life-in-Death was she,
Who thicks man’s blood with cold.