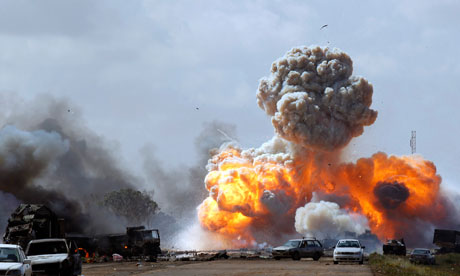 Vehicles belonging to loyalist forces explode after an air strike by coalition forces, along a road between Benghazi and Ajdabiyah Photograph: Goran Tomasevic/Reuters (from UK Guardian)

For those who are interested in such things, now is a good time to pay attention to the public discourse surrounding the bombardment of Libya. Some of it will be non-sensical, of course, while in other quarters arguments about international law, the legacies of (in this case Italian) colonialism, human rights, the character of air war, and the principle of “humanitarian intervention” will be put forth.

In 2003 the rationale for the invasion of Iraq included fear (Iraq has WMD); human rights (the Iraqi government’s repression of Iraqis) and political illegitimacy (“He gassed his own people!”). A seemingly endless flow of retired generals, uncritically repeated language which “framed” the issues without seeming to do so, computer graphics and pundit-holograms sluiced through electronic media. This was not so much a debate about the looming invasion as it was a marketing campaign in favor of it. Indispensable to that task was a semi-informed citizenry who responded to various ideological cues automatically. Not all of them, mind you. But a sizable slice of the US electorate became convinced– if they even needed convincing– that war was desirable.

Now we have another chance to witness how a military campaign is prepared in advance in the minds of ordinary people. By what combination of argument, assumption, appeal to emotion, media spectacle and geographical-historical ignorance are we led to countenance the bombardment of Libya?

As with many political events, there is a huge amount of confusion about the decision to attack Libya and consequently no neat left/right divide. The anti-imperialist left (as distinct from the liberal-left which includes hawks such as Kerry, Clinton and of course Obama) finds itself in this instance in agreement with the libertarian right (Ron Paul, believe it or not a plurality of “Tea Party” activists, et al). One of the myths of US foreign policy is that the Democratic party views military action as an absolute last resort. We have only to survey the current state of the world–particularly Africa, Central Asia, and the Middle East– to turn that assertion on its head. And the most cataclysmic war fought by the US in recent years– the Vietnam War– was pursued with single-minded purpose by Cold War liberals (Kennedy, Johnson, et al).

In a situation such as this it goes without saying that the long duree of the region (Libya’s colonization, decolonization, and experience of postcoloniality) is rarely even referenced. Instead a few key figures and events will effectively “stand in for” that past, shaping our understanding of the present crisis. The Lockerbie bombing, for example, or Gaddafi’s support for various terrorist/ national liberation movements. Thus we can see right in front of our eyes the way that history evaporates upon contact with postmodern politics. As the Jameson essay suggested, we experience this moment schizophrenically, as an event with the barest suggestion of any context– without origin or end.

With UNSC approval the bombardment of Libya is “legal” in terms of international law. It is even reported that members of the Arab League requested some form of intervention. On the other hand, AL secretary Amr Moussa made these remarks on Saturday:

“What is happening in Libya differs from the aim of imposing a no-fly zone,” he said in a statement on the official Middle East News Agency. “And what we want is the protection of civilians and not the shelling of more civilians.”

In addition, as many news outlets have observed, the mission in Libya appears to be morphing from the establishment of a no-fly zone– which is in itself the violation of national sovereignty and thus an act of war– to “regime change.” No one has said as much, mind you, but the understanding is that the deposal of Gaddafi would be welcome.

Adding to the overall confusion is the fact that Gaddafi and Bush II’s regimes reached a degree of rapprochement in 2004, when Gaddafi declared his commitment to the War on Terror. A flood of western oil company executives and weapons manufactured by the US, the UK and other NATO countries then ensued. The bad joke, it is said, around CIA headquarters in the early days of the campaign to sell the Iraq invasion was, “We know Saddam has WMD– we’ve got the receipts.” Something like that is happening at present. Arms that were sold to Gadaffi are now being destroyed with NATO weaponry. Can you guess who might benefit financially in this scenario?

Against the justifications governments always put forth in order to rationalize their policies we must– and this is not mere cynicism– weigh geo-political objectives, access to natural resources, and military-industrial complex (MIC) profitability. We also need to read the signs: to sift through the images, icons, and sound-bytes being used to represent this event. Failure to do so is to cede our critical capacities.