Waiting for the Barbarians

What are we waiting for, assembled in the forum?

The barbarians are due here today.

END_OF_DOCUMENT_TOKEN_TO_BE_REPLACED

pop is usually defined in opposition to some other sort of culture (ex. “high” culture)

related to this opposition is a view of pop as a symptom of decline; as the culture of those without culture. an ersatz culture. there are left- and right-wing variants of this argument: on the left, pop as a kind of mass culture used to keep people opiated. on the right, pop undermines tradition.

“a general process of intellectual, spiritual and aesthetic development”– i.e. as training for the individual but also on a larger scale, ex. the cultural development of Europe, Africa, the American South, etc.

“a particular way of life, whether of a people, a period, or a group”– a broader, more anthropological definition which would extend beyond a canon of great works. In this usage, all groups have their own culture. taken to an extreme we can think of not only the culture of a particular religious or ethnic group but the culture of computer programmers, the culture of cookie jar collectors, etc.

END_OF_DOCUMENT_TOKEN_TO_BE_REPLACED

Hernan Cortes: “We Spanish suffer from a sickness of the heart for which gold is the only cure.”

Below: A map of Equiano’s travels. 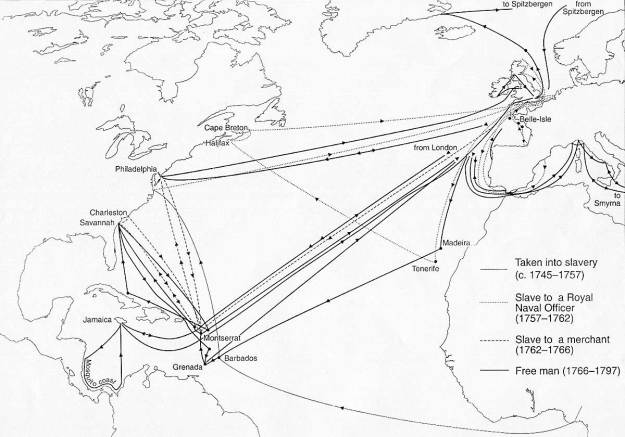 Equiano and the Rise of the Liberal (bourgeois, capitalist) Subject

The massive influx of wealth from the Americas during the 16th, 17th and 18th centuries created the economic conditions for the rise of a class of people who were neither aristocracy nor peasant. There had, of course, been merchants, craftsmen and traders for some time in Europe, but their numbers and influence were minor compared with the years following the opening of the western hemisphere to colonization. The rise of this class was above all dependent upon the surplus created by unpaid, unfree labor.

END_OF_DOCUMENT_TOKEN_TO_BE_REPLACED

We listened to a track by Asian Dub Foundation on Friday as a way of thinking about Arjun Appadurai’s essay on “the global cultural economy,” remember? ADF bears the marks of numerous influences, including dancehall and bhangra. Yet in the process of traveling, cultural practices often mutate or take on different significances because their context (“-scape”) has shifted. Consider what happens to Labh Janjua’s bhangra song Mundian To Bach Ke when it’s remixed by Panjabi MC and then “discovered” by Jay-Z:

Even as we encounter different pop works, we’ll be talking about popular music throughout the semester. A friend sent this link to me and I thought it might be worth considering. As a musical genre, the mashup evinces a clear connection to the sample, though formally it’s much more radical– strictly speaking neither bricolage (a composite text built from whatever’s at hand) nor montage (a jumble of heterogeneous parts). If the sample lifts a break to use as an aural leitmotif– an organizing sound, riff, etc., a hook of sorts– then the mashup takes a much bigger bite out the original works and attempts to graft them. Also, it could be productive to reflect on Billboard’s choices for 2009 in terms of form and content: what do these tracks share in common? At a thematic level most if not all of the songs seem to tell listeners to ignore present concerns in order to enjoy the moment, a kind of disco worldview: “just dance.” Or am I reading that wrong?

Here’s a decent link to a pdf:

For those who’d like a bit more information on neoliberalism you can follow this link which features (yet another link to) an interview with UCB prof Wendy Brown.

Finally, I mentioned a film in class today which is definitely worth screening, Life and Debt (2001).

END_OF_DOCUMENT_TOKEN_TO_BE_REPLACED

We should begin the course by defining the terms in its title, Popular and Culture. Raymond Williams’s excellent book Keywords gives the etymology and development of these concepts, available on-line here. Your assignment for Thursday is to print out and read these two short articles AND search for an alternate definition of Culture. To make the latter part of the assignment more interesting, you may not use a standard dictionary or wikipedia.

For now, we might adopt a functionalist perspective on popular culture and think about what role it fulfills in society. We can think of pop as a means of escape, as dope, as a space for working out social contradictions such as class conflict, as a kind of dreaming, as pleasure, as a platform for the enunciation of ideas. We should think about what we do when we consume popular culture and how those activities relate to the concepts of leisure and free time. Is pop an autonomous space, an experience which gives us a sense of freedom or of equality (with other consumers of pop)? Or is pop a kind of cul-de-sac, a range of products and practices which effectively contain deeper desires for liberation from the routines of everyday life? These sorts of questions will lead us inevitably to another key concept for the study of popular culture, ideology.

END_OF_DOCUMENT_TOKEN_TO_BE_REPLACED

The term “autobiography” is an invention of the Age of Revolution– the late 18th and early 19th centuries– when Europe saw the advent of a cultural movement named Romanticism which was a response to the rationalist imperatives of the Enlightenment. In its broadest sense Romanticism sought to reach beyond Reason into a realm of spiritual and aesthetic transcendence, a program exemplified by many Romantic poets’ concern with heightened states of consciousness and artistic spontaneity. Romanticism was fascinated by the idea of the subjective perception of universal truth, and writers such as Wordsworth and Shelley taxed their own powers of observation and introspection in order to better represent the world in which they lived.  That autobiography as a literary form would come into prominence at this time, then, seems logical enough. And the project the genre of autobiography claimed for itself was nothing less than the construction of what we, the legatees of the Age of Revolution, consider more a matter of Nature than Culture: the autonomous self, or what some scholars have called the Bourgeois Subject. This notion, Linda Anderson has written, was “generated at the end of the 18th century but still powerfully present in the middle of the 20th” and held that  “each individual posses a unified, unique selfhood which is also the expression of a universal human nature.”

END_OF_DOCUMENT_TOKEN_TO_BE_REPLACED 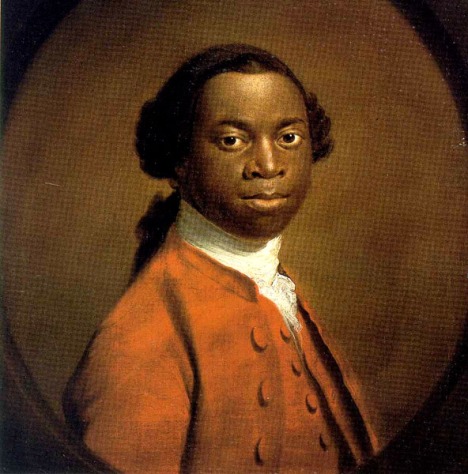 Above: Gustavus Vassa AKA Olaudah Equiano