Just to remind everyone: papers are due at the beginning of class. This is a hard deadline. Remember: MLA format, reasonable font and margins, works cited page, stapled, multiple sources (with the exception of the Davis/Bederman prompt for VIAL). This is your opportunity to dazzle me with your informed and imaginative response to the assignment.

Here’s a link to an article about the threat of extinction to 1/4 of land mammals (and 1/3 of sea mammals as it turns out).

“God has… made us the master organizers of the world to establish system where chaos reigns. He has given us the spirit of progress to overwhelm the forces of reaction throughout the earth. He has made us adepts in government that we may administer government among savage and senile peoples. Were it not for a force as this the world would relapse into barbarism and night. And of all our race He has marked the American people as His chosen nation to finally lead in the regeneration of the world. This is the divine mission of America…. We are trustees of the world’s progress, guardians of its righteous peace.

“What shall history say of us? Shall it say that we renounced that holy trust, left the savage to its base conditions, the wilderness to the reign of waste, deserted duty, abandoned glory?… Our fathers… unfurled no retreating flag. That flag has never paused in its onward march. Who dares halt it now– now, when history’s largest events are carrying it forward?”

“Thank God for the iron in the blood of our fathers, the men who upheld the wisdom of Lincoln and bore sword or rifle in the armies of Grant! Let us, the children of the men who proved themselves equal to the mighty days, let us, the children of the men who carried the great Civil War to a triumphant conclusion, praise the God of our fathers that the ignoble counsels of peace were rejected; that the suffering and loss, the blackness of sorrow and despair, were unflinchingly faced and the years of strife endured; for in the end the slave was freed, the Union restored, and the mighty American republic placed once more as a helmeted queen among nations” (5).

“The cyclone of civilization rolled westward; the forests of untold centuries were swept away; streams dried up; lakes fell back from their ancient bounds; and all our fathers once loved to gaze upon was destroyed, defaced, or marred, except the sun, moon and starry skies above, which the Great Spirit in his wisdom hung beyond their reach.”

— Simon Pokagon, “The Red Man’s Greeting” at the 1893 Columbian Exposition.

“My thoughts, the thoughts of Washington, Trotter and others, were the expression of social forces more than of our own minds. These forces or ideologies embraced more than our reasoned acts. They included physical, biological and psychological forces; habits, conventions and enactments. Opposed to these came natural reaction: the physical recoil of the victims, the unconscious and irrational urges, as well as reasoned complaints and acts. The total result was the history of our day. That history may be epitomized in one word– Empire; the domination of white Europe over black Africa and yellow Asia, through political power built on the economic control of labor, income and ideas. The echo of this industrial imperialism in America was the expulsion of black men from American democracy, their subjection to caste control and wage slavery. This ideology was triumphant in 1910”

It’s easy enough to see the grounding for Beveridge’s remarks. He positions himself, and by extension the nation, at the apex of a hierarchy of races. God himself has ordained this superiority. In distinction to the “savage and senile” America and Americans are charged with a global, even cosmic, duty to propel humanity forward into the light of civilization. In the face of degeneration, the slide into exhaustion and weakness, an American Empire will vivify the world. And if this process of invigoration is violent, if the work of “adepts” and “guardians” and “trustees” necessarily entails extermination or punishment then who are we to deny the claims made upon us by a “holy trust”?

Beveridge’s speech to the senate is spoken in the language of blood, which operates in several different registers. There is the sanguinary image of “our blood and treasure”– the human and financial capital invested in the pursuit of American Empire. This project consists of a double gesture of de-colonizing the Philippines, of attempting to cleanse the trace of “three centuries of contact with a decadent race”– the Spanish– and governing “these children”– Filipinos– who “are not capable of self-government.” The outcome of this articulated process depends on a kind of magic: “what alchemy will change the oriental quality of their blood and set the self-governing currents of the American pouring through their Malay veins?”

In his appeal to the Senate, Beveridge counterposes the “precious blood that must be shed” by American soldiers against the pernicious influence of material comforts which may lead to an emasculated pacifism. The ennervation of the nation, “Mammon and the love of ease,” threaten to “debase our blood” such that “we will fear to shed it for the flag and its imperial destiny.” Blood is the thread connecting the economic and racial wealth of a republic expanding into empire. It is the currency of that struggle for glory and in turn its reward. In the brutal occupation of the Philippines “our soldiers’ blood is flowing” in order to vivify the blood of the nascent empire’s true heirs. Yet “ barbarous” Filipinos themselves– “Orientals, Malays, instructed by Spaniards in the latter’s worst estate”– are promised redemption by a transfusion of republican virtue.

Our screening of This Bloody, Blundering Business resurrected some themes we’ve already encountered in VIAL: blackface and satire. I’m inclined to take a short detour into the history of the relationship between the Philippines and the United States not only because of this serendipitous echo, but for the more prosaic reason that 2,364,815 people in the United States claim Filipino descent according to the 2000 census of whom 40,072 live in the beautiful city of San Francisco. (Want to see how Asian America breaks down according to specific groups? Go here, but be advised it’s a pdf.)

Taking such a detour means that our reading schedule will change. Here’s what I propose:

Monday: Discuss Chapter 5 of Manliness and Civilization and This Bloody Blundering Business.

Wednesday: Discuss “African-American Soldiers and Filipinos: Racial Imperialism, Jim Crow and Social Relations” by Scot Ngozi-Brown in The Journal of Negro History, Vol. 82, No. 1 (Winter, 1997), pp. 42-53. You’ll need to go to JSTOR, download the pdf and print it out.

Friday: Open discussion focusing on issues of race, gender, civilization and empire from the Spanish-American War to the present.

Saw this just now and I knew y’all would be interested. The Wall Street Journal has an article titled Two Families Named McCain. Check it out. You might play the following youtube clip while you’re reading.

Fri. Screen a documentary on the Philippine-American War.

For the first paper assignment go to the VIAL page.

Welcome to the postcolonialism unit. Monday we’ll discuss the first four chapters of Tsitsi Dangarembga‘s Nervous Conditions. Recall that the title of this book is from a phrase written by Jean-Paul Sartre in his introduction to Frantz Fanon‘s seminal Wretched of the Earth. You can read that introduction here.

Wednesday we’ll continue with NC, up to chapter 7.

Friday we’ll short for the book up to chapter 9.

Go to the Contemporary Culture page on this site to see the first paper prompt. 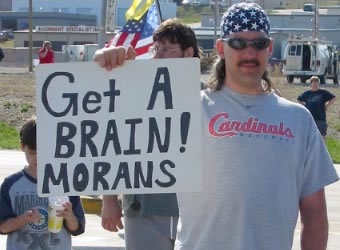 This gentleman wanted me to remind you that the final presidential debate is this Wednesday, Oct. 15, 2008 at 6 pm PST.

Friday: Chapters 4 and 5 of Nervous Conditions

Monday: Chapter 2 of Manliness and Civilization

For those interested in following up on our screening of the Homestead Strike documntary: