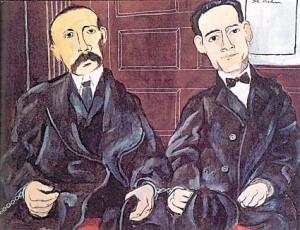 We got off to something of a start on Wednesday in our discussion of two powerful metaphors for American society, the melting pot and the salad/mosaic. The latter of these is, as I’ve already said, an expression of multiculturalism, with its symbiotically connected principles of tolerance and diversity. Slavoj Zizek has written on the “ideology of tolerance” in an essay (pdf) that rewards the effort it requires to read.

An html version of Israel Zangwill’s 1908 play “The Melting Pot” which popularized that term at a time of large-scale immigration to the United States. Interestingly the melting pot metaphor was used as early as the late 18th century and notably by Ralph Waldo Emerson, though in his version the US was a “smelting pot.”

So your music finds inspiration in America?

Yes—in the seething of the Crucible.

The Crucible? I don’t understand!

Not understand! You, the Spirit of the Settlement!

[He rises and crosses to her and leans over the table, facing her.]

Not understand that America is God’s Crucible, the great Melting-Pot where all the races of Europe are melting and re-forming! Here you stand, good folk, think I, when I see them at Ellis Island, here you stand

[Graphically illustrating it on the table]

I should have thought the American was made already—eighty millions of him.

[He smiles toward Vera in good-humoured derision.]

Eighty millions! Over a continent! Why, that cockleshell of a Britain has forty millions! No, uncle, the real American has not yet arrived. He is only in the Crucible, I tell you—he will be the fusion of all races, perhaps the coming superman. Ah, what a glorious Finale for my symphony—if I can only write it.

Note the absence of African-, Native- and Asian-Americans.

Here’s something vaguely disturbing: a diversity consulting firm whose “services” are characterized as “a smart investment that will pay long-term dividends.” Are the varieties of human culture something like a range of commodity brands? In a consumer economy dominated by the value of “difference” (“Think different” Apple commands us, thus begging the question of whether this universal will to difference is a self-devouring concept)– a quality that invariably seems to reside on the surface of things (the absolute importance of packaging to product differentiation)– is it possible that the logic of the market has come to completely structure our understanding of cultural distinction?

The issues these two metaphors evoke or attempt to address are manifold and stupendously complex: identity, the nation, culture, capitalism, classical liberalism, nativism, immigration, social hierarchy, democracy, pluralism, etc. It may help, however, to note that at any given moment in American history certain ideas regarding the cultural and/or racial identity of the nation have predominated. In the late 19th century racial difference was held to be purely biological, a “fact” that meant that some people were simply unsuited to full citizenship. This belief began to erode prior to WWI when racial biologism lost some of explanatory power to the notion of ethnicity. Ethnics were held to be distinct by virtue of their different cultural origins rather than physiology. Germans, Italians, et al (always “white ethnics”) were destined to lose their specificity through one of two social processes (or, alternately, some combination of them): assimilation– in which ethnic Europeans became like the white (Anglo-Saxon) majority– or acculturation– in which the WHOLE of American society, including Bostonian bluebloods, were changed by the influx of immigrants. With the rise of a contentious working-class activism, the advent of WWI and an ensuing paranoia about subversive elements undermining the US political body, those related processes– acculturation/assimlation gave way to a much more aggressive and authoritarian model of “Americanization.” The notion that immigrants would become citizens while retaining the defining features of their homeland culture was held to be naive and possibly dangerous. In fact, many immigrants were seen as threatening enough to deport, usually under the rubric of criminal syndicalism, national security or, as with the Palmer Raids, for merely having the “wrong” political views: anarchism, communism and socialism.

The story, of course, doesn’t end there; in class we’ll make an effort to sketch out this history and then move deeper into Gangster.