Blaue blume means “blue flower,” an important symbol within German Romanticism representing a hunger for the infinite, sexual and spiritual desire, and a surplus of emotion. The philosopher Novalis writes of the blue flower in his unfinished work Heinrich von Ofterdingen. From the introduction:

The old people were already asleep; the clock was beating its monotonous tick on the wall; the wind blustered over the rattling windows; by turns, the chamber was lighted by the sheen of the moon. The young man lay restless in his bed; and thought of the stranger and his stories. “Not the treasures is it,” said he to himself, “that have awakened in me so unspeakable a desire; far from me is all covetousness; but the Blue Flower is what I long to behold. It lies incessantly in my heart, and I can think and fancy of nothing else. Never did I feel so before: it is as if, till now, I had been dreaming, or as if sleep had carried me into another world; for in the world I used to live in, who troubled himself about flowers? Such wild passion for a Flower was never heard of there. But whence could that stranger have come? None of us ever saw such a man; yet I know not how I alone was so caught with his discourse: the rest heard the very same, yet none seems to mind it. And then that I cannot even speak of my strange condition! I feel such rapturous contentment; and only then when I have not the Flower rightly before my eyes, does so deep, heartfelt an eagerness come over me; these things no one will or can believe.

END_OF_DOCUMENT_TOKEN_TO_BE_REPLACED

Here’s the site I was talking about in class.

Also, a news article from the UK Guardian which, on its own, adds another brick to the Orientalist wall of representations of Persia/Iran. Note, however, that Barbie has many critics, including various medical organizations which have studied Barbie’s influence on body-image and psychological development in young girls, as well as hypothesizing what ailments a 36-18-33 woman 35 pounds underweight might suffer. Barbies or Barbie-like dolls now feature in world culture at large and include Fulla, the Egyptian Barbie, and Sara, who hails from Iran. 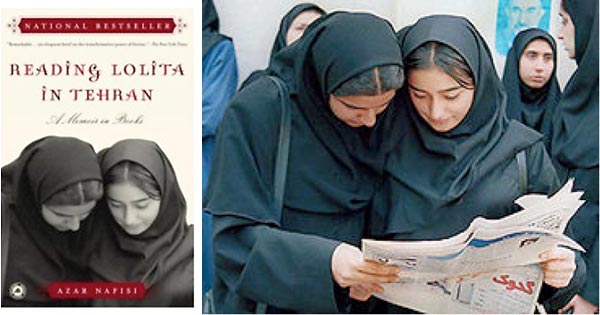 For next week, look over this article by Hamid Dabashi (published at Al-Ahram Weekly, from which the images above were taken) and this one by Matthew Thomas Miller. On the “new Orientalism” see this interview with Fatemeh Keshavarz. 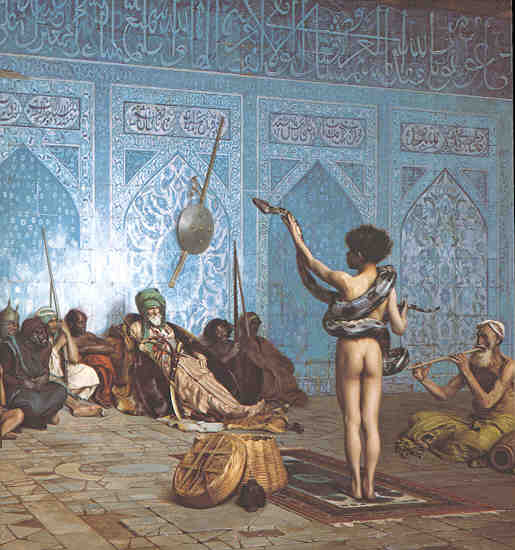 Veteran acidheads will tell you that the outcome of any given trip is determined by set and setting. “Set” means what you bring with you– the various bundle of neuroses and tics all of us possess– while “setting” denotes atmospherics. Hardly anyone would recommend taking psychedelics in a slaughterhouse, for instance. The proper set and setting might lead to (temporary) enlightenment, while some discord between the two could mean a shot of thorazine in the emergency ward.

Taking this piece of deviant wisdom to heart, let’s consider the relationship between subjectivity (set), environment (setting) and experience (trip). Culture permeates and thus partially determines all three of these categories insofar as who we are– our assumptions and sense of identity– the landscape of signs we navigate, and our lived, felt response to that imaginative terrain all yield to the influence of cultural imperatives and possibilities. If every one of us in the last 100,000 years of human culture have understood ‘love’ or ‘sadness’– in part because of cognitive hardwiring peculiar to the human brain– still over the ages we have expressed and given significance to these feelings differently, have distinguished particular kinds of love or sadness, and privileged some of those distinctions over others. Love, after all, is variegated: patriotic, erotic, fraternal, familial, etc.– I “love” film noir and black coffee though it’s doubtful I would kill or die for them.

Set and setting are mutually imbricated: they overlap. Each of us is a product not only of the wetware of the cerebral cortex but of a lifelong education whether we go to school or not. Everybody gets schooled, right? In the classroom, on the job, under the bleachers, etc. Society– this place right here– is the matrix (from the Latin mater, mother or womb) that generates us. That knowledge and sense of self is thus emplaced: it is specific to locale and moment. Yet the world isn’t a one-way street. Sets (individuals) shape their settings, and here we have a view of history and humanity that seems fairly fundamental. We are born into this world only to re-make it. The world is both given and contingent, mutable and a hard, cold, final horizon of the possible and impossible. Hamlet was right when he said to Horatio “there are more things in heaven and earth…than are dreamt of in your philosophy”, though on the other hand sometimes philosophy (theory) is the only way to know what we don’t know. Those of us who’d rather not think about the world are doomed to miss its horror and brilliance. Not-thinking is a luxury most of the people on the planet simply don’t possess. In other words, passivity and narcissism are for the privileged– those who can afford not to be interested.

So: our setting consists partly of culture. Ipod, myspace, jolly ranchers, warm beer, clean sneakers, hipster fixies, pine-scented, CGI, traffic noises, Madame Cleo, Herman Melville, aloe vera, free minutes, FTW, LOL, etc., etc.– all the semiotic shrapnel of a hyper-mediated environment exploding and imploding 24/7. And because we are saturated thusly, because nobody seems to want to leave us alone with their endless appeals for our attention, it’s far too easy to let the shower of cultural detritus come down unexamined– which is exactly the wrong move.

Next week we’ll be talking about Orientalism, Persia, Satrapi, 300, and representations of history and geopolitics in popular culture. Let’s call that work a form of discourse analysis: gathering the fragments together (images, bytes, text, etc.) and examining their effects as a totality. We may discover that we ourselves as subjects number among those effects.

The Gate of All Nations at Persepolis, which Xerxes commanded be built.

I was going to post some youtube clips about the Iranian Revolution. There are some good videos out there and a huge number of racist, Islamophobic, colonialist ones as well. Pretty depressing.

This is one of several videos that look like raw footage of the revolution. There’s no voice over or any attempt to organize the images into a linear form. 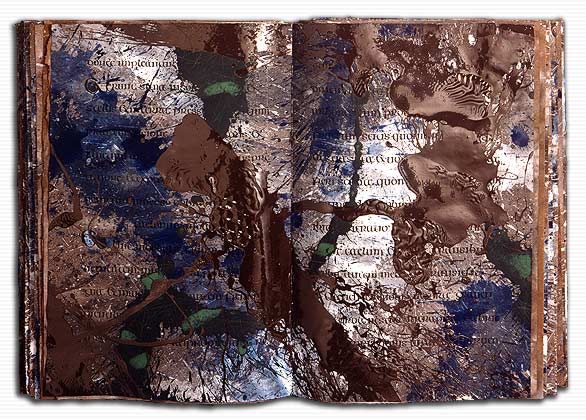 An original work by Denis Brown.

Note the layering of textures and texts. In the past, a palimpsest was created when an old vellum was erased and recycled and a new text was placed on top of it. Inevitably some of the prior writing ghosted through to the surface. When we transpose this concept onto physical terrain such as the Presidio we see that the traces of the past are never completely obliterated. They bleed through the new exterior here and there, complicating and enriching our understanding of that space. As a critical method, the palimpsest requires not only that we note this phenomenon but that we then develop some argument about the meaning of this juxtaposition. By now the history of the Presidio is very familiar to us. What claims can we make about the strata of historical moments piled upon that site?

Fantastic presentation today and a great discussion afterwards. I was thinking about our rudimentary trope-system and some of the suggestions made. Janelle mentioned Nellie Furtado’s song “I’m Like a Bird”. Though she might better serve our purposes were she Californian rather than Canadian, the lyrics of that song, with their reference to flight and escape, tap into a key value of California Culture, one that Robert Johnson’s Sweet Home Chicago hits upon as well: the desire to move unimpeded through space, bird-like, whether toward the promised land of California dreams; Gold Mountain; orange groves heavy with ripening fruit; a “virgin” territory of material wealth and possibility; or Hollywood,  the center of image-production, the proving ground for luck and talent.

To this thickening stew Anthony tossed in an unexpected ingredient, the Blue Angels, stationed at Miramar, whose speed and thrust exceed even the fastest of birds. I’m not sure if those navy aviators (“Don’t ever call them pilots,” my dad used to instruct me. “In the Navy pilots drive ships.”) refer to themselves or their craft as ‘birds’ or some variant, but it is interesting to note that one of the main hazards confronting fixed-wing aircraft is the dreaded “bird strike”, perhaps the ultimate (and most destructive) meeting between bird and man.

In troping, ALL of this is fair game. The key is to construct a coherent system with intelligible links.

What then have we got? The fabled Birdman of Alcatraz– a sinner-saint known for his terrible crime and his kindness to animals– and his Catholic correlate, St. Francis– church father, philosopher and San Francisco namesake– whose statuary is forever flecked with pigeon droppings. Complicate that pairing with the anthropomorphic Donald Duck, in some sense a monstrous Bird Man with his tortured mode of speech, his sailor suit (sans pants) and his ridiculous rages.

The down-and-outer huddled on the curb buzzed on Thunderbird, taking flight of a different kind.

Or the Maltese Falcon, as Maria rightly pointed out one of the most significant birds we’ve yet encountered: a bird-man artifact, a creation of human hands, a sign of tribute to the king, the central character of Hammet’s novel.

How about the state bird, the California Valley Quail? Will this symbol of California fauna fit into our system of tropes?

Look where we’ve managed to travel in playing this critical game: the Hispano-Catholic origins of California culture, the military- and prison-industrial complexes of the 20th century, the Depression Era, San Francisco as a space of modernity, the innocent yet disturbing fantasy-images inscribed on the minds of children by one of Hollywood’s titans, Walt Disney. In this apparently innocuous exercise we’ve touched upon the chronic restlessness that seems to animate the California Dream, forms of social control, core institutions such as the military and the church, and mass society. Not bad. 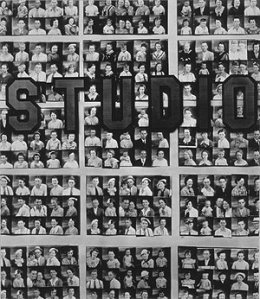 I graded the quizzes, which ranged from excellent to abysmal. Regarding the latter it was quite clear that some have done little if any of the reading. This is rapidly leading me to the conclusion that a final examination may be necessary to adequately evaluate students’ performance.

Attendance has also come up as an issue. More than three unexcused absences means a no-pass in the attendance portion of the final grade. Looking at the roll sheet I see that quite a few people have already crossed this Rubicon. I would strongly recommend… well, not missing class.

From school you can also take bus #18 and get off @ 39th/Geary, walking down two blocks to the theater.

SCHOOL NIGHT – Mondays are School Days and Nights. With proof of being a student, faculty or staff member, your admission is only $6.50 on Mondays.

Final essay assignments are up on the appropriate pages. Two pieces of advice:

Begin your research now. It’s absolutely vital that these papers be the product of informed reflection. You’ll need to time to let your ideas and the information you gather ferment.

Write multiple drafts. As I said in class these papers should be superlative: no grammar problems; proper format; a developed, intelligent engagement with some of the major themes of the course.